After the 1941 attack on Pearl Harbor, the lives, homes, and hearts of many were broken when Executive Order 9066--an order that called for the exclusion and internment of all Japanese-Americans from the West Coast (outside of Hawaii)--was signed. More than 120,000 Japanese-Americans lost their homes, their jobs and business, and their farms. Children were taken out of school and in some cases, were separated from their families.

The United States' media soon became very anti-Japanese. In Hollywood, war films with Japanese villains were being produced--and not only were the Japanese being portrayed as villains, but the villainous characters were being portrayed by Chinese/Chinese-American actors. Even before 1941, a lot of Japanese/Japanese-American performers had suddenly stopped making films, but I think that it may be safe to assume that those who did work into the early 1940s were eventually interned, or may have found it difficult to find work in the United States' entertainment industries, especially Hollywood.

I was "going" on my usual search for new names and new faces on the internet when I stumbled across the name and face of Iris Yamaoka. Shortly after, I discovered that she had a big brother, Otto. According to IMDb, Otto was born on April 25, 1904 in Seattle, Washington. His sister, Iris, was born in 1910 (Amoeblog says 1911).


Otto's film career (according to his IMDb credits) began in 1930 when he garnered an uncredited role in The Ship From Shanghai. Also, during the 1930s, Otto worked as a salesman at a costume shop. His last film role was as "Foo Yung" the cook in Trouble in Sundown (1939). He is probably best remembered for his work as "Kashimo" in The Black Camel (a 'Charlie Chan' film), "Ching" in Libeled Lady (1936), and "Kimo" in Petticoat Fever (1936).


Iris's film career (according to her IMDb credits) began in 1929 when she garnered the role of "Foo" in China Slaver. Her last film role was as the "Secretary" in the 1937 film, Waikiki Wedding.


During World War II, the Yamaoka siblings were both sent to the Heart Mountain "Relocation" Camp in Cody, Wyoming and it appears that after World War II, neither one of them returned to the film industry. They both passed away in New York City--Iris on November 28, 1960 and Otto on June 5, 1967.

"Otto Yamaoka is "amusing" as Charlie Chan's assistant in The Black Camel." (The Milwaukee Sentinel)

*I was unable to find movie links for any of Iris Yamaoka's films. View her movie credits on IMDb here*

"Iris is one of eight players added to the cast of a picture tentatively titled Wanted." (The Evening Independent)

"Iris and Otto Yamaoka are both a part of the supporting cast in the 1936 comedy, Petticoat Fever." (Kentucky New Era)

Star of the Month 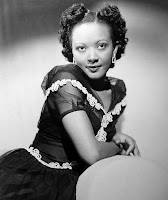